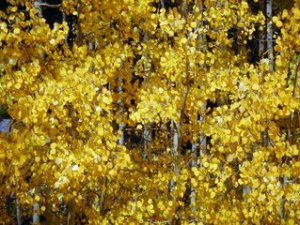 It was an unusually warm spring day in our home in suburban Denver, Colorado. Beads of sweat were streaming down my back. I was digging a hole deep enough to plant an Aspen sapling that was on the ground, resting on its side. Thinking I was very close to the needed three-foot depth, I jabbed the spade deep into the ground and hit something hard. The grinding sound of steel against granite was all too familiar. I had previously unearthed large clumps of red clay, stubborn. fist-sized rocks and tangled up fibrous taproots, but this one boulder did not want to give up its hold. Trying to determine the outermost edges, I inserted the point of the spade in all directions and was thwarted each time. I seemed to have exposed a motherlode of bedrock.

Feeling a bit discouraged, I speared the spade into a softer spot in the ground, went inside, poured a large glass of lemonade and slumped deep into a soft cushiony armchair to consider my course of action.
I sank back into the chair and recalled another time, a time when I sought bedrock of a different kind. I was a few months shy of my thirtieth birthday, a major milestone for anyone pondering the loss of youth. And I was also musing other existential questions, as steep as the 14,000-foot rocky peaks. 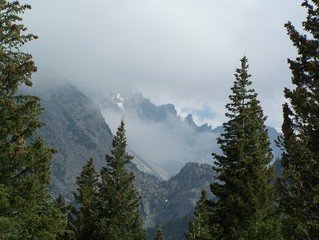 Well over a hundred years earlier, it was gold fever that brought thousands to Colorado. For me, it was a yearning to stretch as tall as the mountains that silhouetted my western skyline. It was a time of introspection for me. A full 2,000 miles from my east coast roots, I contemplated how much my life was determined by geography. Had I been born in another century, or another continent, I would have other views, a different faith, sculpted by parents from another culture. So, here in my adopted mile-high city, I sought to climb the summit of my own beliefs by wiping the slate clean: a sort of religious do-over, beginning at my spiritual sea level.

I moved into an area of agnosticism. Not stagnant agnosticism, but as a restless sojourner. My search brought me to an assortment of houses of worship. And, on one Palm Sunday morning, I attended a lecture given by a man whose name I do not recall. His thesis was the comparison of the Christ story to fairytales and various mythologies. His intellectual delivery was compelling, and I walked to the parking lot feeling very informed. But as I started my car’s engine, I heard another sound. It was a resonate voice rising from a space deep inside me.  Each word was its own reverberating chord, my body as the musical instrument.

These simple, yet powerful, words held so much force that I slumped back in my seat. The motor was still running, but I was not going anywhere. Rivers of hot tears ran down the sides of my face, the salty liquid forming warm little pools in my ears. I felt a tsunami of love wave over me. It was time to stop digging. I found my bedrock.

Until this writing, I never told anyone about that pivotal experience in my spiritual journey. I did resume my introspective climb, but this time with firm footing. Thirty years later, I am still on a spiritual journey, but with an unshakable foundation.

Seeking bedrock doesn’t have to be an existential quest. As the director of a department, I headed a staff of about 20 people. The university was restructuring, and my staff was to be divided up and reassigned to different departments. Rumors ran amok. My staff was visibly shaken by the thought of being split apart and relocated across campus. On our last meeting together, I did not have the words to heal their angsts, but I did offer this advice,

What are your unshakable beliefs? I reminded my staff of how they were valued by all who worked with them. They were kind, responsible and dedicated members of the university. When it feels as though we have lost solid earth beneath our feet, in times of grief, in times of fear, when unsure about tomorrow, the gospel of Matthew has some solid words, words that are worth the climb, words on which we can cling. 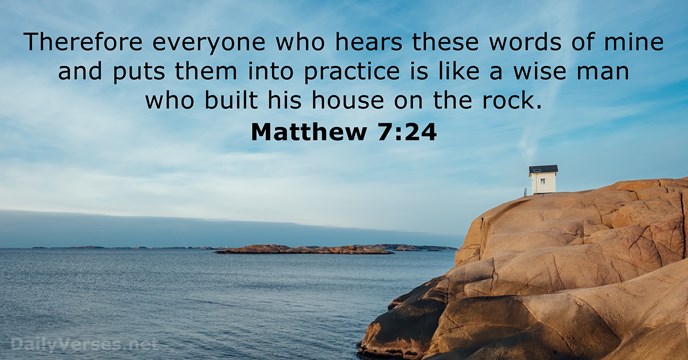